The Brigade Sports Complex hosts the Navy Men’s and Women’s club hockey teams and offers a variety of skating programs open to the public.  Open Skate time is available several days a week and daily during school vacation weeks. 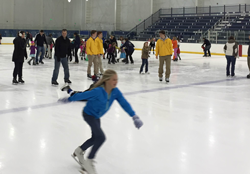 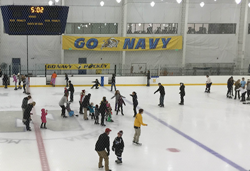 The ice rink calendar and forms for all of our programs are available along the right side of this page.

The Brigade Sports Complex does not issue/rent helmets. Participants choosing to wear a helmet for Open Skate or Learn to Skate must provide their own. Helmets are required for Stick & Puck sessions, with a full cage if under the age of 18.  For skating programs, Guest/Non AP are welcome but are subject to a higher fee.

The goal of the Learn to Skate program is to help students develop the skills needed to fully enjoy the sport of skating.  The Brigade Sports Complex’s US Figure Skating Learn to Skate Program has been formed to provide a fun, safe atmosphere for all students age 3 and above to learn how to ice skate.

Each student will receive one 25 minute lesson per week for 7 weeks, the use of rental skates during lessons.

“Party on Ice” is a 2 hour Ice Skating Party at the McMullen Hockey Arena.  Held during Open Skate Sessions, children and parents alike enjoy the ease of having their party celebrated in true Navy style, complete with a Navy Football or Stuffed Billy the Goat for the birthday child.  What could be better you ask?  The answer is the pizza and fun that the kids will have.  Book now for this season!  Dates fill quickly.

Price for admission to the Men’s D1 and Woman’s D2 Club teams are $10 for Adults, $5 for youth, and Midshipmen are free. Admission is free for the Men’s D2 games at the McMullen Hockey Arena, with the exception of a few tournaments.

For more information on all things Navy Hockey check out usnahockey.com