Dahlgren Hall, designed by architect Ernest Flagg in 1898, was completed in 1903. It was named for Rear Admiral John A. Dahlgren, U. S. Navy, a Civil War inventor of scientifically designed, large-caliber naval guns. Dahlgren Hall has served variously as an armory, indoor drill area and a Weapons Department laboratory. 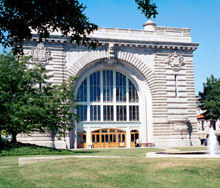 Dahlgren Hall is an example of the Beaux Arts architecture used by the Academy’s principal architect Ernest Flagg. Flagg is credited with reform in American architecture that embraced pragmatic, inexpensive designs to ease the housing crisis that developed during the Great Depression. He applied these ideals in his design for the Academy to turn what an 1898 edition of ‘‘Scientific American” deemed ‘‘a motley assemblage of buildings” into a monumental design fit for the nation’s highly respected naval training institution.

At first glance, Dahlgren Hall appears to mimic the design of 19th century European train stations. The large, utilitarian design of the building was meant to reflect its intended purpose as an armory, and the interior was left intentionally bare with exposed metal trusses and large, imposing metal gates. The overall effect was meant to convey the themes of naval supremacy popularized by Alfred T. Mahan’s groundbreaking ideas of the era.

In addition to serving as the Academy’s armory, Dahlgren Hall was the site of graduation from 1903 to 1957 and has hosted the most graduation ceremonies of any site at the Academy. From 1975 – 2006, it housed both the USNA Ice Rink and Drydock Restaurant. The ice rink was moved to the Brigade Sports Complex in 2006, but Dahlgren Hall is still the home of Drydock Restaurant, as well as support offices and a large Assembly Room.